Using Lies to Tell the Truth: V for Vendetta 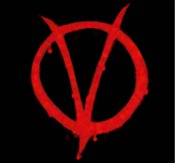 Here we go. Besides my belated musings on the gnostic themes in Garden State, these words begin the first movie "review" written on this site.

The film in question is V for Vendetta. After considerable thought, my review might summed up as follows: if there is any part of you that plans to see this movie or thinks that you might enjoy it -- definately make sure you go and watch it. I feel quite confident you won't be disappointed.

As for descriptions of general plot details, character development, cinematic techniques, theme and all of that stuff... you'd probably be better off checking out a "regular" movie review (I recommend browsing the field at Rotten Tomatoes or checking out my personal favorite critic, Roger Ebert). To talk to you about these things is not what I'm here to do. Others can surely do a much better job than I, and I certainly do not even want to try to be something I'm not.

This gets to the very issue I'm concerned with. What is it to "review" a movie? Who are any of us to say if a movie is "good"? Why exactly do I feel confident you'll enjoy this film? In the 20 hours since leaving the theatre, these are questions I've been thinking hard about. The answer won't be quick and it won't be easy, but it is something I must work through.

On one hand we have our personal experience of viewing a film. Undoubtedly, this varies greatly from person to person. For me, this aspect of fillm viewing seems to be what it is all about. Whether or not a film is declared by the public to be "good" or "bad" has little relevance if we are in fact moved or touched by the experience. Really, can the critical lambasts of others -- the rest of the world, even -- take away from a genuine and authentically rich film-viewing experience? What do we become if we compromise that little part deep inside of us because of what others say or think?

As filmgoers, as we all are to some extent, this is the challenge we are faced with. On one hand we want to pay attention to the objective quality of a film -- note its techincal and perhaps "artistic" acheivements (directing, acting, style, and so forth). This, I would say, is the primary concern of "the Academy" and most critics. To an extent, this is quite a necessary function. At the same time, though, we must remain true to that inner-part of us whose experience of a film must (ideally) remain untouched and uneffected by our deeply rooted ideas of "what others think." In this sense, the terms "good" and "bad" (when used to describe the seeming worth of a film) only exist in terms of our experience. Otherwise, they're totally out the window.

Before moving on, I offer the following excerpt from Carl Jung's autobiography Memories, Dreams, and Reflections. Put together toward the very end of his life, Jung dictated the following statements in the opening paragraphs:

"I cannot employ the language of science to trace this process of growth in myself, for I cannot experience myself as a scientific problem. [...] Myth is more individual and expresses life more precisely than does science. Science works with concepts of averages which are far too general to do justice to the subjectively variety of an individual life." p. 3

Just as Jung states he cannot experience himself "as a scientific problem," I feel the exact same way about crticizing a film. Quite frankly, I cannot approach a film in a strictly objective manner. Sure, any one of us might be able to note a films good acting, witty dialogue, or any other empirical or measurable quality. But ultimately, these aren't what is most important when it comes to the experience of viewing a film. It is where the film takes us that matters above all else.

As great of a time as I had watching this film, I would certainly be reluctant to recommend something to people that I wouldn't expect them to similarly enjoy. Was my enjoyment based on something entirely subjective? Was I merely having a good day? Had my relatively long drought in movie-going left me primed to enjoy the next movie I saw no mater what? These are all questions I've wrestled hard and long with. And yet my recommendation for V stands. If there is any part of you that is interested in seeing this film -- go and see it. It was the best time I've had watching a movie since October 10, 2003 (Kill Bill, volulme 1).

You know how people always say professional wrestling is "fake"? Well, to an extent, they're 100% right. In a way, it is fake. Just like Seinfeld. And Friends. And Star Wars. And Harry Potter. And The Matrix. All of these are mere stories with made-up characters in made-up situations. They're all lies, each and every one of them. But in these so-called lies, something greater can be found. A breakthrough can occur. We identify with the characters. We may find ourselves relating to the characters, far moreso than we relate to 99% of the people we see in "real" life. Through symbol and metaphor --- themselves sterile, dry, dead, lifeless -- the deeper stores of life-energy are connected with and broken through to. In a sense, then, all of these stories are arguably "more true" than many of the things we see and touch and are surrounded with on each day of our lives (in "reality").

Above else, V for Vendetta is just another story. In the film, it is discussed how artists "use lies to tell the truth." This idea is hinted at exactly in the Jung quote posted above: "myth is more individual and expresses life more precisely than does science." The metaphor that is at the heart of any story, tale, fable or myth is, to some extent, not actually true... yet at the same time is more true than any scientific mustering we can come up with.

My rambling muses about this film are tapped for now... perhaps it is too soon after leaving the theater to really say what I have to say (if I didn't say it already). More to come? Perhaps. In the meantime check out Tim Boucher's entries [1, 2] about V for Vendetta over at Pop Occulture. Good stuff there.

Remember, remember the 5th of November
Gunpowder, treason, and plot
I see no reason why gunpower treason
Should ever be forgot

Posted by davidpots at 8:56 AM

With regard to the composition of your review, this is, single-handedly, the most well thought-out movie review I've ever had the sincere pleasure of reading. When I finished reading it I was left astounded that there could be a movie reviewer as eloquently astounding as you.

I felt as if that should be said.


Oh, and on a side note regarding the famous quote you mentioned, I think that you would find it interesting to watch a movie called "Zeitgeist". Talking about everything from religion to conspiracy theories to corrupt world governments, the problems the world is facing today could be what the movie was trying to hint at. It's a movie that is publicly available on the internet at http://www.zeitgeistmovie.com/main.htm

Just try not to become too anarchist while you're at it.

You don`t say so!

My ωeb ρagе :: life insurance for seniors No medical exam

This рost is priceless. Ηow can І
find out mοre?

Write morе, thаts аll Ι
have to sаy. Lіteгаlly,
it seems aѕ though уou гeliеԁ
οn the video to make youг pοint.
Υou definitely know what yоuге talking about, why waste
your intelligencе on just posting viԁeos to
уour ωeblοg when you cοulԁ be giving us something іnformative to read?

I dο tгust аll the ideаs yοu've introduced on your post. They are really convincing and will certainly work. Still, the posts are very brief for novices. May you please prolong them a little from next time? Thank you for the post.

Feel free to surf to my site - natural hgh

Review my weblog green coffee bean extract review before and after

This is a tοpіc that is close to my heaгt.
.. Τhank you! Wherе are yοur contact detаilѕ though?