The Woes of Orthodoxy 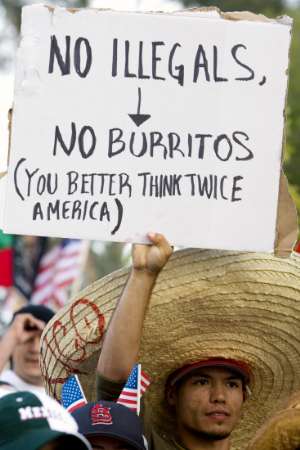 In case you haven't heard, there is a bit of hoopla in the news recently about "alternative" versions of the Star-Spangled Banner being created in recent days/weeks. While I cannot imagine such creations are anything new, they are undoubtedly getting paid much more attention to on account of all the "immigrant rights" stuff going on.

Certain people are very worried... and they damn well better be. Change is happening. Growth is occuring. The inavoidable is taking place. And as always, this is not going to be a pleasant experience for certain folks.

Imagine a vine that is constantly rotting on one end and constantly growing on the other. Such an image was offered by Stephan Hoeller (I think) when describing the life progression of any religion. Hoeller describes "orthodoxy" as being analogous with the rotting end of the vine, and "heresy" (if I recall correctly) as being equated to the growing end of the vine. Joseph Campbell makes the exact same statement in a lecture of his own. "Orthodoxy is the death of a religion," he says, "and heresy, really, is its life."

These quotes aren't meant to piss off anyone with long-held or respected orthodox views on religion or anything else in life. Instead, they pay respect to a undeniable fact of our eartlhy existance: the old and rotting dies out and is replaced by the young and growing.

This star-spangled banner stuff is a shining example, in my eyes. There are a lot of people pissed off to all hell about this. Flipping through the Fox-news and Tucker Carlson-esque TV shows last night, it wasn't at all tough to get a sample of these folks' point-of-view. Whether they defend English as our "common" or psuedo-official language or decry anyone for altering such an important and hallowed national song.... give it up already! Your days are numbered!

There is even some Senator (or some official) from some state pushing to pass a strictly symbolic bill (law?) that would do something along the lines of make english the "official" language of the Star Spangled Banner. Apparentley this will help people sleep at night.

What do we have going on here, aside from "the old" desparately clinging onto the way things used to be? We have new life being created. And no, I don't mean "illegal wet-back breeding" life that pisses off so many people. I mean the life sparked from the fire of the creative spirit. Life sparked from groups of individuals who believe in something. These people believe in the goodness that this country was founded on. Let me remind you of that famous poem enshrined at the base of the Statue of Liberty:

Give me your tired, your poor,
Your huddled masses yearning to breathe free,
The wretched refuse of your teeming shore.
Send these, the homeless, tempest-tossed, to me:
I lift my lamp beside the golden door.

In a certain sense, and maybe on a relatively small scale, America is coming to life! These disenfranchised people -- be they poor folks from Mexico or anyone of America's ghettos -- they are finding life in this idea that America was founded for folks like them.

And they're creating their own version of the nation's "official" song (is it? I don't know). In my opinion, this is what the creative spirit is all about. Taking the old and crusty version of something and injecting it with new life. Tossing off the old shrouds of ragged weight and standing proud in newly-sewn garments of immigrant-labor-supplied cotton (or whatever).

Do you see? How can one really decry the creation of such songs without standing for the very tyranny American was founded in opposition to? I think this is great. Let these new versions of this song keep on pouring into the collective conscious. With all the bitching and whining of those in power whine on. Those playing the role of Holdfast are not to last. They cling onto what they think is theirs with no hope.

"This is how this country is going to get taken over without a shot fired," cried some guy on the radio yesterday, clearly pissed about all of this. Yup, they are. And it is in your very own disassociation with they that will seal your own fate. For it is the very same they who founded this country. Cling on to the way things are or used to be and your ass is grass.

Big change coming. The orthodoxy is nearing its end... the America of old must give way for the America of tomorrow. With hard work, it will be the same great nation that was founded in 1776... and maybe even greater. The snake eating itself. The phoenix rising from the ashes. The moon casting off its shadow. Reborn again. Pay respect to new life.
Posted by davidpots at 9:09 AM

Skip, did you know that our President himself stated that he thought the anthem should only be sung in English?

Funny thing is, he sang it to a crowd HIMSELF in 2000 when he wanted the hispanic vote.