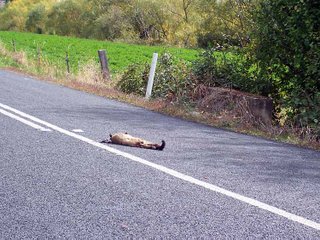 Yesterday, on the way home from work, I had to hit my breaks a bit when a little groundhog/gopher/woodchuck ran out in front of me. Thankfully, I had plenty of time to react, and the little guy made it across the street with no problem. He did seem a bit chunky and out of shape... but perhaps that's just the god-given hardware.

The important thing about this experience was the process of thoughts it got going in my head. Countless times in all of my years, finding myself in similar situations, I cannot help but wonder "come on you stupid animal, look both ways!" And of course, this is a ridiculous thing to expect of such an animal. A "road" to them perhaps doesn't even conciously exist... it just happens to be a part of the ground that is strangely hard and cold and occasionally loud. I cannot expect animals such as a groundhog to have any understanding of what a road is or the thousand-pound flying-steel danger that is to be found on roads each and every day.

At this point, it might have been easy for me to think "well, if I was a groundhog..." ... I would probably look both ways. Or at least demonstrate some semblance of "smarts" in regard to crossing the road. But would I? It is probably very haughty of me to think so. This hopefully begins to get at the place I want to go with this.

We are all groundhogs crossing the street. Only, we're probably not too aware there is even a "street." We're just following our whims, or instincts, our routines, our culturally-given and biologically-given intuition. And while we may not be fully aware of the danger of "fast moving cars," the things that occasionally "hit us," we probably have some inkling of an idea that in every moment there is danger. There are things that can wrong. And what can we do? If nothing else, bust our ass to "get across the street" as fast as we can.

Those groundhogs might not know what a car is, but I'm guessing they're probably programmed to avoid spending too much time in open spaces. Such behavior got their ancestors where they are today and is probably ingrained in them, to an extent.

While I seem to have lost the freshness of this idea from yesterday, I shall push on -- at all times, there are forces in the world "whizzing all around us" which could surely make our life hell at any moment. A tree could fall on us, our house could catch on fire, the building could collapse, a jet engine could fall on us, etc. Or maybe these forces are much more immaterial and sublte -- waves of frustration, doubt, fear, anger, deception may sweep over us. So deceitful are these foes that we may not be consciously aware they've even hit us -- we just suddenly go under their spell and may likely not wake up.

Just as we might find it totally unreasonable for every groundhog to realistically look both ways, it may be a by-and-large notion amongst us all that such "forces" are entirely unavoidable... or even worse, don't exist. I can easily imagine a storybook groundhog who, after having a vision, returns to his burrow to tell the other groundhogs of these things called "cars" that drive on the "roads" who kill our kind all the time. And of course, he would probably be laughed at, scorned, and not taken seriously. Or at least maybe so.

One more stab at it -- say this afternoon, when we all drive home from work or wherever, we too are little groundhogs scurrying across the road. All we know for sure is that we want to get to the otherside -- the safety of the underbrush. We might not consciously be able to name, describe or even see coming the forces that would destroy us... but maybe we have an idea that they're out there. So, perhaps we're simply to run as fast as we can and just hope.

Or maybe not. Maybe there is some higher destiny of perception that is available to each of us. Just as a groundhog is surely "able" to look both ways, even though most of them probably never even think about it, perhaps we too are able to "see" or "sense" or "percieve" these potentially thwarting forces in our lives. They are otherwise unnamable, undescrible, and probably formless... but that doesn't mean they're not out there.

Hopefully you got an idea of the point I'm trying to get across. So don't only look both ways when you go home today, but on that deeper level look both ways. Or at least think about it.
Posted by davidpots at 10:18 AM