Internet Explorer and the Archons 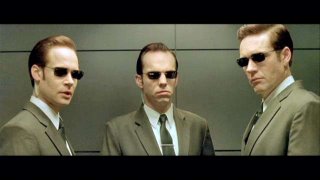 In my novice understanding of Gnostic mythology, the archons are the forces who act to keep us all trapped and shut away from the "transcendent source" we all inherently seek (whether or not we're consciously aware of it). The best pop-culture example of the archons would be the Agents in the Matrix -- their primary purpose is control -- keep us blind, occluded, unaware of what is really going on. In Stephen Pressfield's book The War of Art, I would say his thoroughly-defined concept of "resistance" is a pretty-much exact summation of what these archons are all about (i.e., the internal forces acting to keep us from becoming who we're fully capable of becoming).

The general idea, then, is that we're pretty much required to stand up to and face these archons (or agents or resistence) if we're to make it to the destination we belong. And it won't be easy, for their primary concern is to keep us down and shut-off from this destination. In The Matrix, the entire character development of Neo is based upon this very notion -- he must stand up to the Agents. It takes him the entire movie and even a few near-failed attempts. But in the end, after he "begins to believe," he achieves this goal. Their bullets and kung-fu (ie, their means of control) have absolutely nothing on him. In a sense, Neo provides a metaphorical example of what we must all do.

In my dabblings into Gnosticism, there is a certain idea or philosophy about the archons that is come across quite frequently, and it is this: even though they seem to be against us, evil, and entirely antagonistic, they're actually on our side. How could this be? How could forces who seek to maintain control and power over us be working alongside of us? The answer -- they're there to push us, to test us, to bring the best out of us. They may not (and probably don't) realize they're on our side, but that doesn't matter. For indeed, without their constant and all-pervasive threat, they would not help us become the individuals we're capable of becoming.

Back to The Matrix, for a second. In the second film in the trilogy, we learn that there have in fact been many previous incarnations of "The One" (Neo) who have all successfully reached the Source. This is, in fact, what "The Architect" (the creator of the Matrix) wants (so he can somehow improve/perfect the Matrix). But hold on a second -- if this guy wants Neo to make it to this door, why the hell did he make his life hell with all of these Agents? Why not give Neo a free ride to the Source and get on with it already?

The answer is not simply "because we wouldn't have a movie." The true solution has to do with the Agents -- the archons -- existing to help Neo. What is more important -- Neo being told he is "The One"? Or instead, Neo going through a long process of trials that -- in the end -- leave him 100% believing he is the one? I would most certainly go with the latter here. The Agents, then, are of primary importance -- through their trials and tests they ensure that the individual is 100% worthy of his destined throne.

At the end of the day, then, we can thank the archons -- for without them, the cakewalk that would be life would be without challenge, test, trial, or tribulation. And we would consequently be lesser folks because of it.

Now to Internet Explorer. In the past few months I've been rather heavily immersed into the webdesign world of HTML and CSS. And what have I found therein? Through experience, I've found personal verification of the whispered rumours that have been heard for many long years: IE is a royal pain-in-the-ass when it comes to design. In fact, I daresay it sucks. I've always heard people say this, but never had a reason to agree. But now I see exactly what the big deal is.

Ultimately, there is incompatibility after incompatibility in regard to IE's handling of CSS. And this has been the case for year after year after year. In the incredibly rich and dynamic world of CSS style, techniques, layout, and desgin -- it seems that IE is always the browser that crashes the party. It is the thorn in the side. It is the pain in the ass. And with almost 85%+ of the population using IE, the answer is not as simple as "then don't design pages for IE." For if you're a web designer of any sort (for fun or for business), IE-users are invariably a huge bulk of your audience and cannot be ignored.

So what has happened? Well, it has made the HTML and CSS community that much more resilient. Hack after hack has come along -- which aren't really dangerous "hacks" as much as lines of code that "trick" IE into behaving as it should. As an excited student of webdesign, this has proven to be very frustrating for me. As hard as it is to learn any new language (or whatever), it certainly is a bummer when irrational and illogical rules are frequently stepping on your toes and keeping you back. But I've recently found peace with this.

For, just as the archons or Agents (or whatever) seem to be there to stop us, control us, and keep us held back -- in the end they only make us stronger. And so it is the same with Internet Explorer. As much as part of me wishes I lived in a land without IE telling me what I couldn't do, I'm glad in a way that it does exist. For me and for all the CSS students and experts out there, the best thing about IE is that it makes us better at what we do. It forces us to adapt, evolve, and figure things out. And as the new challenges and trails show their ugly faces (as they most probably will), we all will be there to figure out a way to get around them. Where there is a will, there is a way. So as much as many of us may hate IE, let us ultimately give it thanks and a small grin for forcing us to become better folks.
Posted by davidpots at 8:51 AM