Cured from the Plague of Ideas 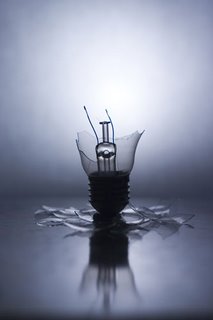 For the last year or so, my primary creative and intellectual endeavor has revolved around my recording of what I've come to call a "personal mythology." Essentially it is a story, which I sometimes refer to it as (along with "book" or "novel"). In the end though, I feel that my primary purpose in this effort is to create my own mythological world which is created from and sustained by my own personal experience. This has become my "task of tasks," as Jung described a similar effort in his life, which most every hour of my life is somehow devoted to.

The analogy I have grown fond of using is the following: given a huge rectangular slab of granite, I've been bestowed with a "vision" of a yet-unformed sculpture within. I feel it is my duty to bring this sculpture out of the granite. This involves sculpting, carving, planning, and so on. Little by little, the sculpture takes form. From head to toe I go, over and over again, chipping away bits and peices of the rock as I go. From a short-term perspective, the progress seems trivial and almost futile. Yet when examined from afar, inklings of definite progress can be seen.

This project has made me very attentive to the ideas that fuel it. These ideas, in some sense, might be said to be "made up" by me, though I'm not entirely happy with that description. Somehow, I feel the ideas are "out there" and it is my job to capture them, like lightning in a bottle or a firefly in a jar. In this sense, I am almost like a servant to these ideas.

I once heard a story about JRR Tolkein describing the first thing he ever wrote about what would become his Middle Earth mythology. It was a cryptic poem describing a journey over the sea on some boat or something. The poem was based on a dream he'd had. He read it to a friend, who asked him in return, "What does it mean?" Tolkein thought for a moment, and then answered: "I don't know... I'll have to find out." That is what I'm talking about. To "make up" an idea is suggestive of forming it out of nothing. I don't know if I can believe this. Experience suggests to me (as does this Tolkein story) that the ideas are already there... it is up to us to go find them, go track them down and bring them into the light. The idea, then -- these "master" themes or forms exist beyond us, and it is merely us who bring them into the world. And in doing so, perhaps we attach to them a bit of our "cultural" experience. This, to me, sounds like a key definition of myth (or at least part of the definition of myth).

Anyway -- back to the ideas. I have grown near obsessive in my attempts to ensure the recording of these ideas as they come to me. For the most part, this involves writing them down. I've become increasingly effecient at writing down as little as needed so that I can later recall the idea in question. This sometimes happens on note cards or napkins, but for the most part is done on my laptop. A recent saving grace has been my cell phone -- in just 4 button strokes, I can be 2 seconds away from leaving a voice memo to myself. This has been invaluable.

At times, however, the ideas can be too much. While engaged in a conversation with a friend, colleague, or family member, (for instance) I might find myself struck with a priceless idea. Writing it down is one way to go about things, but that would be a disservice to the current obligation in which I found myself (the conversation). If you forsake the current task (the covnersation, in this case), than what is life for? If the "current task" is always to be sacrificed, what are we left with? Not a good life. Life cannot be all about writing down each and every idea no matter what the expense.

This is a realization I've grasped on some theoretical level, but the practical and thorough understanding of it has yet to come. Until the other night. For it was then when I found myself in one of the best covnersations of all time with my betrothed, while at the same time having arguably some of the "best" ideas I've ever had. (The older I get, the more and more everything seems to be "the best"... I suppose I'm merely learning how to appreciate things).

During this great conversation, which I was fully engaged in on a delightful level, I came to full realization (or at least the fullest realization yet) that it is okay not to write all the ideas down. In fact, there are bound to be more ideas than we could ever write down. I came to peace with this. After all, what is more valuable -- the experience of having a great idea which informs your momentary action? Or the ability to be able to write the idea down?

The transference of ideas is secondary. The having of the idea is primary. Let them inform our experience. That is what they're meant to do. And maybe one day, if we're lucky enough to have enough time, we'll be able to "get them down" and convey them to others. And I close, now, with a brief excerpt from my personal notes about this general concept.

Find peace with the fate of these “undelivered” ideas – for they will surely remain for another Hero to one day discover, and with any luck, successfully retrieve where you had failed. In this sense, we might be seen as the potential rescuers of the ideas our ancestors could not fully rescue... just as our own descendants will bring light to the ideas that we must pass up.

There is always more we can do, and there is never enough time to do it. Once we realize this, we’re finally free to enjoy the right now from which the ideas stem. Freedom, inner-peace, liberty, are emancipation become ours.

Posted by davidpots at 8:36 AM